STATEMENT OF ACTION REGARDING THE TOWERY FILES 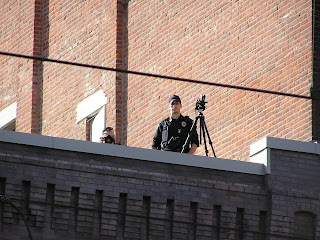 Since 2003, The Bill of Rights Defense Committee – Tacoma (BORDC-Tacoma) has requested and received thousands of pages of documents detailing the wide variety and methods used by the Tacoma Police Department and other regional and national agencies to monitor protected First Amendment activities. We have studied them, shared them, published them and used them to support our efforts to provide oversight of police actions in Tacoma and across the United States. It seems apparent that serious Federal and State violations have been committed by law enforcement, in which citizens’ personal information has been collected, improperly stored and inappropriately distributed to other government agencies and even to the public.

Following an acknowledgement by the U.S. Army at Joint Base Lewis-McChord that an individual known as John Towery was working as a confidential human intelligence source (CHS) for the Pierce County Sheriff’s office and the Tacoma Police Department, BORDC – Tacoma requested (under appropriate provisions of Washington State Open Records Laws) the following information:

On January 19, 2011 the City of Tacoma released 133 pages of information, primarily from only one part of the records we know to exist. Many more pages have yet to be released, currently without explanation for their being withheld. This single released file, however, was more than enough to substantiate our belief of the depth and insidious nature resulting from amateur informants reporting to entities which (although may have the authority to authorize infiltration activity where appropriately warranted and when done correctly) are not following proper procedure regarding information the infiltrator/informant reports.

Many of you may be personally aware that besides the exaggerated, unfounded and damaging comments in the document (which we believe should have been expunged since no criminal activity was apparently proven nor appear to have been pursued), additional identity and possibly security-sensitive information was also unnecessarily released by the city, unredacted. The responsibility for protecting such personal information (complying with release-ability and redaction) rests with the releasing agency which made the document available, in this case the City of Tacoma.

BORDC – Tacoma’s efforts to expose the violations of Federal and State laws shall continue until all such damaging misinformation, untrue documents and allegations are expunged and/or removed from available public records. Join us to make this a reality.


WHAT YOU CAN DO

We encourage all citizens (since anyone can be, and many groups are still presently being, surveilled) and especially those who felt damaged by the City of Tacoma’s recent actions to participate in the following:

1) Attend the next "Citizens' Review Panel"
(Tacoma Municipal Building, Monday, February 7, 2011 at 5:30pm) http://www.cityoftacoma.org/Page.aspx?hid=7043
One currently scheduled agenda item will address the Tacoma PD's compliance with CFR 28 section 23 (Code of Federal Regulations to be followed with the acceptance of certain federal funds) regarding appropriate handling and auditing of collected information which the City and County appear unfamiliar with and unaware of their possible violations and consequences.
FAQ for this topic: http://www.iir.com/Justice_Training/28cfr/FAQ.aspx#q2
and audio link of previous meeting from Dec 6, 2010, with testimony alleging the city’s non-compliance and a file/checklist from the Dept of Justice to help them create and maintain proper oversight. At the 57 min mark you will here the BORDC-Tacoma Chairperson address the Chief of Police's remarks about the Northwest Detention Center, the Towery Affair and CFR 28: http://131.191.254.124/ondemand/ondemand-a/120610CRP.wma

2) Speak at the Tacoma City Council Meeting "Citizen’s Forum".
(City Council Chambers, second Tuesday of the month, February 8, 2011)
The meeting begins at 5pm, but at the closing of the meeting attendees may speak for 3 minutes about any topic under the Council's control (such as police actions and the city’s document release). We suggest speakers demand the complete release of all records associated with the Towery Dossier to include the likely emails amongst City of Tacoma staff discussing the release request and the subsequent denial or approval for dissemination (such internal requests should have occurred and should have also been included with previous document requests).

3) Persuade members of the Judiciary Committee in Olympia to expand and pass the pending Senate Bill 5048 "Washington State Enhanced Intelligence Bill" http://apps.leg.wa.gov/billinfo/summary.aspx?year=2011&bill=5048
This law, which is intended to curb the above mentioned abuses, makes clear remedies available to damaged parties and provides for oversight and auditing of such information, seemingly sorely lacking in the City of Tacoma as evidenced by the recent release.


For years BORDC - Tacoma has tried to advise, warn, and educate the City and its residents about the dangers of such “security” programs and the potential abuses which could occur. We now know, without a doubt, that they have occurred. If you are concerned by improper handling of personal information, please direct your efforts at those government parties responsible for protecting that data as a matter of course, not toward those working to expose the problems.

The timing of this unfortunate event is strangely extraordinary since it establishes an unprecedented chance to get involved and truly affect change by simply demanding compliance with the law. Remember, millions of dollars in Federal funds from the Department of Justice, the FBI, Department of Homeland Security and other federal agencies comes to the City of Tacoma but with the caveat that they not improperly collect, store or transmit information about our First Amendment activities. The City of Tacoma has proven they have failed to comply with such requirements and you can help shine light on this egregious situation and participate in shaping real change for the future. Please join with us to make this important change happen.

Bill of Rights Defense Committee - Tacoma
Posted by Fantum at 8:00 AM